The Andes: The Complete History of Mountaineering in High South America

The history of climbing in the Andes has more unanswered questions than that of any other mountain range in the world. This climbing history began in the late Stone Age and covers a span of more than 15,000 years. The Andes is a climbing history that spans the ages, documenting the ascents of thousands of adventurous souls of all epochs: from unknown cavemen, hunters, Indians, grave-diggers, and miners to explorers, scientists, surveyors, artists, and, of course, modern sportive climbers!

With a wealth of over 800 pages, 290 illustrations and 60 maps, The Andes: The Complete History of Mountaineering in High South America is unparalleled in its breadth and bravely faces these unanswered questions.

The Andes is the most detailed and complete history ever written about the range. The book also includes a list of over 3,000 first ascents in the range—an unparalleled resource for any mountaineer.

, the Book Depository, and on order at most independent bookstores.

Note on eBook: The iBook version is an enhanced eBook and we consider it the best value and the best format for enjoying this book. That said, it only works on the iPad and Apple computers.

Note for international buyers: The iBook and Kindle versions are available internationally. Purchasing one of these versions will have significant savings in shipping costs. The paperback is also available through some retailers outside the United States, including Amazon UK and Amazon EU, but we cannot control the retail price on these copies, and they could have a list price more than the recommended U.S. $64.95. If you have an issue, please contact us.

Any photograph of the Torres del Paine National Park is immediately thought to represent Chile. Thus, the image below could be like any local postcard. The Cuernos (horns) del Paine are shown on left and La Fortaleza in center. And yet, none of these bold peaks is higher than 2800m above sea level. 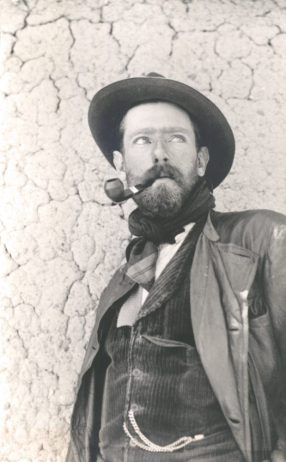 Antuco volcano in southern Chile, first ascended in 1828 by Poeppig and a local hillman. This view by a French naturalist, quite inaccurately, purports to illustrate an eruption of Antuco. Claude Gay, 1845.

Cover of the Revista del CIADAM. The drawing on the cover shows a typical statuette that has been found on several Andean summits. 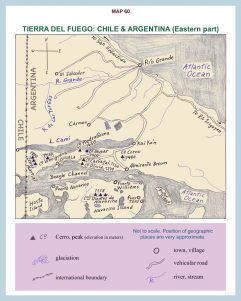 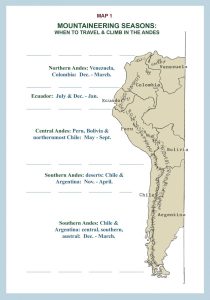 Map of the Mountaineering Seasons in the Andes

One of the most imposing mountains in Peru is Nevado Salcantay (6271m), whose south face shows in this greeting postcard mailed to friends and supporters by the 1974 German Naturfrfrende expedition.

By 1980, the highest unclimbed peak in the Cordillera Blanca was Nevado Puntancuerno (5959m). It had been attempted twice by strong North American groups. The Peruvians Américo Tordoya and Augusto Ortega boldly scaled to the top.

Always lacking funds, Annie Peck used to advertise her lectures and herself, attired in men’s pants, an unpardonable attitude for the epoch.

One of the many unclimbed, unnamed mountain peaks that Shipton’s party sighted above the clouds of the Hielo Patagónico Norte in 1963/64.

Begin typing your search above and press return to search. Press Esc to cancel.